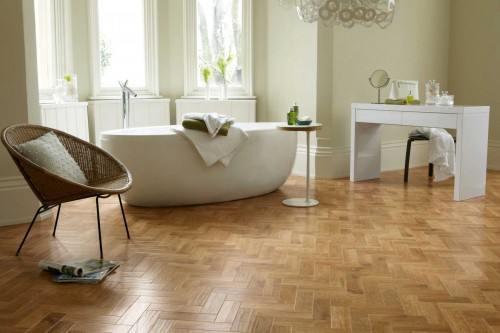 Flooring had humble beginnings, including wood flooring. Despite it’s uses today as an elegant option, its appearance was much humbler than you might have expected before the commonplace use of polished hardwood in the late 19th century.

Only the very wealthiest could afford flooring other than dirt, and this was usually made of stone. The very first wood flooring was hand-scraped and quite literally sanded – workers would rub handfuls of sand on the floor to make it as smooth as possible. As you can imagine, this was an arduous task that only the richest could afford.

The Colonial Era is when wood flooring became widespread. Thanks to North America’s abundance of old-growth forests, the majority of people could stop walking on dirt and enjoy wooden plank flooring. This initial commonplace flooring, made of wide, thick-cut planks, was hard and durable due to the trees age and size.

Following this, wood flooring remained the predominant choice for the next few centuries. Advancements came in the 18th century, with the addition of decorative flourishes in wealthier homes. However, the use of stains and varnish, which is ordinary today, was still uncommon. It wasn’t until the late 19th century, following the Civil War, that the average American began to have polished hardwood flooring in their homes, with the trend soon following in the UK and elsewhere.

Wood flooring then dropped in popularity in the 20th century. Following the Second World War, carpet became cheaper due to the advent of synthetic fibres, replacing wood flooring as the go-to option. It wasn’t until the early 1990’s that hardwood began to rise in popularity again, with new and existing homes being fit with polished hardwood in several rooms.

For some wood flooring of your own, take a visit to our showroom today. We have plenty of stunning options available, including Karndean wood. Contact us today.

Ready to put the Hart back into your home?

Please see Our Work for inspiration and feel free to email us with any questions or call us to discuss your requirements. Alternatively please pop into our showroom on Dales Road.

If you know about Instagram sensation Sophie Hinchcliffe, aka Mrs Hinch, then you are probably one … END_OF_DOCUMENT_TOKEN_TO_BE_REPLACED

There are a number of factors you need to think about when choosing the best flooring for kitchens. … END_OF_DOCUMENT_TOKEN_TO_BE_REPLACED